The first three of Samuel de Champlain’s settlements in New France are well known, but the fourth one remains forgotten. It is as if history had a sudden lapse of memory.

In 1604 there was the St. Croix Island settlement, located in the present state of Maine in the United States. It was the very first European settlement north of Florida. It was fortified with a palisade made of piles, inside which various buildings were located along two streets forming a cross. 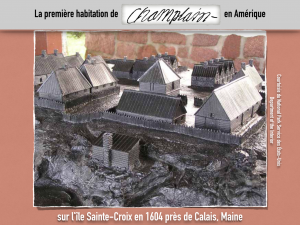 The following spring, after a severe winter that killed more than a third of the settlers with scurvy, the settlement was moved to the mainland at Port Royal, Nova Scotia. It resembled the fortified farm hamlets seen in the late 16th century France.

In 1608, Champlain and several settlers came to settle on the shores of the St. Lawrence River, specifically at Kébec, an Amerindian word meaning “place where the water narrows”. The settlement of Kébec was erected near the site of the abandoned First Nations village of Stadacona that Jacques Cartier had visited in 1535. 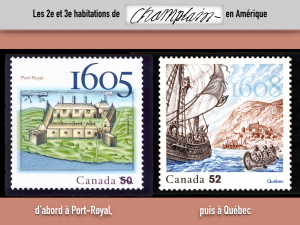 Then in 1615, the dwelling of Carhagouha (various spellings are used) in the present-day parish of Sainte-Croix de Lafontaine in Ontario was erected within the triple enclosure of this vanished Aboriginal fortress in the heart of the ancient Huron-Wendat country, about fifteen kilometres from Penetanguishene (meaning “place of white sands”). At that time, the population of Huronia was estimated at between 20,000 and 30,000 Aboriginals spread out in several communities. 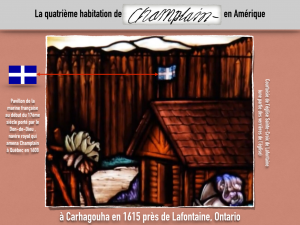 Before the construction of a parish church in 1857, the first settlers of Lafontaine (from Batiscan, Joliette and the counties of Soulanges and Vaudreuil, among others) had to go to Penetanguishene for their spirituality. In 1874, the present brick church replaced the old log one at the same location, more precisely at 327 Lafontaine Street West in Tiny Township. Three richly colored stained-glass windows, relating to the personalities of Carhagouha, namely the local people, the first governor of New France (1612-1635), and the founder of the first mission in Huronia, tell the story of Carhagouha.

François du Peron (a Jesuit missionary born in Lyon, France and nicknamed Anonchiara by the Natives) describes the Huron-Wendat as follows: “They have almost all more sense in their dealings, speeches, courtesies, encounters, versatility and subtlety, than the wisest bourgeois and merchants of France. They regulate the seasons of the year by the wild animals, fish, birds and plants; they count the years, days and months based on the moon. […] They have open marriages“. (Les Relations des Jésuites, Volume XV, page 156)

They agreed to receive missionaries in order to establish closer commercial ties with the French and to obtain military aid from them. In response to Champlain’s request to allow marriage between the French and Hurons, the Hurons taught him that marriage was a matter between two individuals and their families and was not subject to the decision of the Council. Fifty-four years ago today, Pierre-Elliott Trudeau, then Minister of Justice, echoed the same theme when he publicly declared, “The state has no business in the bedrooms of the nation”. 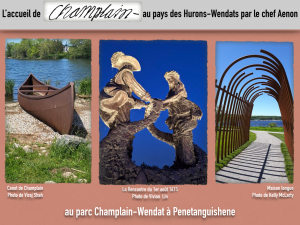 It is very likely that Champlain also learned some Wendat fables during his stay in Huronia, such as “The Red Mountain Bears”, about the science of healing . They are as much of a metaphor as those of Jean de La Fontaine, a famous French poet.

The map opposite of the Huron country created by Saint Jean de Brébeuf, a Jesuit, indicates in red the strategic location of Carhagouha in Georgian Bay in 1631, south of Thunder Bay, about fifteen kilometres west of Penetanguishene.

According to Lafontaine’s ancestors (Aboriginal, Métis and European), Champlain’s home in Carhagouha was his cabin in Canada’s Pays d’en Haut (Upper Canada). The surrounding stands of white pine trees, with a straight, uniform trunk (which became the official tree of Ontario in 1984), allowed Champlain’s 14 or so collaborating soldiers to build him a modest and suitable rectangular log dwelling within the Huron-Wendat fortress.

The construction of the building consists of erecting a housing structure by placing large pieces of white pine on top of each other, squared with an axe, using a system of mortise and tenon joints. The gaps between the pieces are then caulked with a variety of easily accessible materials, such as wood moss. Typical of the forest regions, the log structures perpetuate a tradition inherited from the first white people of America.

The stained-glass window of the Sainte-Croix de Lafontaine church, related to Champlain, reminds visitors of the Carhagouha dwelling, on the roof of which can be seen the flag of the French navy in the early 17th century. This royal blue flag decorated with a white cross symbolizing the Christianity implanted in America as early as 1534 by Jacques Cartier in Gaspé, is said to have been flown on the main mast of the Don-de-Dieu in Quebec in 1608. The royal blue refers to the colour of the coat of arms of the French sovereigns who ruled New France.

Joseph Le Caron (a Recollet missionary born in the Paris region of France) was one of the first four priests in Canada (the other three being Fathers Denis Jamay, Jean Dolbeau and Brother Pacifique Duplessis), as well as the second European to visit Huronia, after Étienne Brûlé (the first Franco-Ontarian). Born in 1586, Le Caron arrived in Huronia in 1615, shortly before Champlain established a relationship with the Huron-Wendat nation. On August 12, 1615, he celebrated the first open-air Catholic mass in Ontario in Carhagouha. A few weeks earlier, Fathers Le Caron and Jamay had celebrated the first mass on the island of Montreal on June 24, 1615, St. John the Baptist Day.

In his book Histoire des Premiers Travaux des Pères Récollets en Nouvelle-France (1615 – 1629) (History of the Early Works of the Récollets Fathers in New France), Gustave Labine (lawyer) reports “As for the Iroquois, the hatred of the French was the most powerful obstacle to their conversion. They never forgave Champlain for having helped the Hurons, their enemies, in the wars they waged against them. It can be said that this act of the founder of Quebec, however justifiable, was a constant impediment to the conversion of these savages, and the primary cause of the murderous wars that the colony had to sustain for one hundred and fifty years against all the Iroquois tribes and their allies.” (pages 43 et 44)

Alfred Mullie, an elder from Lafontaine, tells us on video (at 5 min. and 40 sec.) the highlights of the history and legends of Carhagouha and the Sainte-Croix church with the musical accompaniment of the old French hymn for prayer groups “O Jesus, meek and humble of heart“. Champlain and his team must have sung this hymn lyrically on August 12, 1615, in the land of the Huron-Wendat. Today, this proud Aboriginal people live in Wendake, meaning “at the Wendat,” a Native reserve located in the Quebec City area.

It was around 1830 that the French colonization of Lafontaine, a district of Tiny Township, began with the Quebec families Descheneaux, Brunelle, Marchand, Marchildon, Maurice, Beausoleil, Desroches, Laurin, and Marion.

With the hope of making people love history.