Nearby was found in 1867 by Edward George Lee an astrolabe bearing the date 1603. This instrument, used for determining latitude, is believed to have been lost by Champlain about 7th June, 1613, on his exploratory expedition up the Ottawa River. (Ontario’s Historic Plaques)

In May 1613, Samuel de Champlain, the French explorer-cartographer, travelled up the Ottawa River. To avoid the rapids, he chose a course through a number of small lakes near Cobden, Ontario. Champlain and his men were forced to portage and to climb over and under fallen logs at one particularly difficult point by Green Lake, now also known as Astrolabe Lake. It was here, according to several nineteenth-century authors, that Champlain lost his astrolabe.

If this is correct, the astrolabe remained where it had fallen for 254 years. Eventually a 14-year-old farm boy named Edward Lee found it in 1867 while helping his father clear trees by Green Lake.

Captain Cowley, who ran a steamboat on nearby Muskrat Lake, offered Lee ten dollars for the astrolabe. Lee never received the money nor saw the astrolabe again. Cowley sold the astrolabe to his employer, R.W. Cassels of Toronto, President of the Ottawa Forwarding Company. He in turn sold it to a New York collector, Samuel Hoffman. The astrolabe was willed to the New York Historical Society in 1942 where it remained until June 1989, when it was acquired by the Department of Communications for the Canadian Museum of Civilization.

This astrolabe is unique. It is the smallest of 35 mariner’s astrolabes surviving from the early part of the seventeenth century and the only one from France. It is in excellent condition, except for one missing piece, a small ring on the bottom edge of the disk, to which a weight was likely attached to help keep the instrument plumb. The ring was probably broken off sometime in the late nineteenth century, since it appears in an 1879 photograph of the astrolabe.

To learn more about the mystery around Champlain’s astrolabe:

“Champlain’s astrolabe: the journey of a mythical Canadian heritage object” 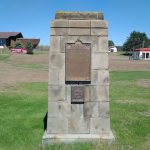 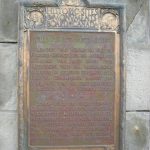 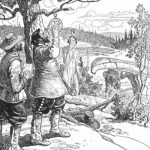 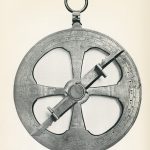