On his first journey up the Ottawa River in search of the northern sea (Hudson Bay), Champlain stayed briefly at an Algonquin village near present-day Cobden. After learning that he had been misled as to the proximity of the illusive sea, Champlain proceeded down the Ottawa River from Lower Allumette Lake and returned to Quebec. (Ontario’s Historical Plaques) 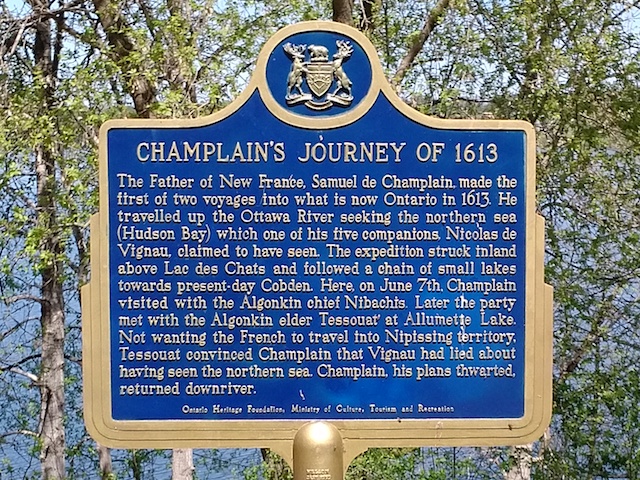 The historical plaque is located in Cobden, behind the Visitor Centre in a park with a tall flagpole, on the north side of Highway 17. 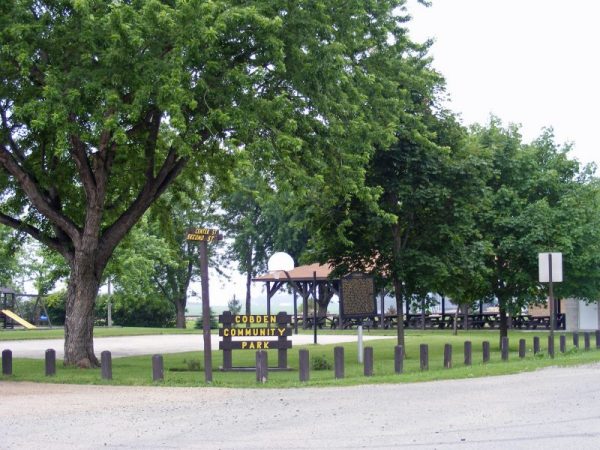 Champlain and the Ottawa Valley, 1613

On his return to New France, Champlain travelled up the St. Lawrence River to meet his Aboriginal allies at today’s Lachine Rapids near Montreal. Their information and assistance were essential to his further travels along the St. Lawrence and into present-day Ontario. Champlain met his Algonquin (Anishinabe) colleagues at the rapids and promised to assist them in their campaign against the Iroquois (Haudenosaunee). In return, he received two canoes and one guide to aid in his own expedition. While at the rapids, Champlain also encountered Nicolas de Vignau, a young French interpreter who claimed to have travelled to Hudson Bay and back in just 17 days. Eager to test the validity of Vignau’s claim, Champlain departed Montreal with four Frenchmen, including Vignau, and one Algonquin (Anishinabe) guide in late May 1613.

Champlain and his party continued up the St. Lawrence River beyond today’s Lachine Rapids and proceeded across Lake of the Two Mountains to the Ottawa River.

They then made their way north and west along the Ottawa River, where they encountered numerous challenging and dangerous rapids. At one point on the river, they met members of an Algonquin (Anishinabe) nation who attempted to discourage Champlain from travelling any farther, probably to avert any possible threat to their control over the region’s waterways and trade. But Champlain was determined, and in the end the Algonquin agreed to provide him with a guide in return for a French hostage, and the party continued on its way.

They left the Ottawa River at Lac des Chats and made their way through a series of lakes with extremely difficult portages. At Muskrat Lake, they encountered another Algonquin (Anishinabe) nation, made an alliance and were led to today’s Allumette Lake, where Champlain was reunited with the Algonquin (Anishinabe) war chief Tessoüat, whom he had first met at Tadoussac in 1603.

Tessoüat welcomed Champlain with a “tabagie” (celebration) on Morrison Island, but the chief was not keen for Champlain to travel on to today’s Lake Nipissing to build an alliance with the Nipissing nation, as Champlain desired. During this meeting, Champlain was led to believe that Vignau had lied about his journey to Hudson Bay. He was expelled from the group and Champlain did not see him again. Unable to travel farther on this particular expedition, Champlain prepared to return to Quebec and on to France. Before departing in mid-June, he erected a white cedar cross on Allumette Island. He was back in France
by the end of September.

In France, Champlain published an account of his journey titled Les voyages du Sieur de Champlain Saintongeais, capitaine ordinaire pour le Roy, en la marine. He also worked to establish a new investment group, the Compagnie du Canada, or “Champlain’s Company,” to ensure continued financial support for exploration and settlement in New France. Recognizing a need to attend to the religious development of the new colony, Champlain recruited members of the Récollet clergy to establish a mission in New France. He was keen to return to the St. Lawrence Valley and arranged to depart France in the spring of 1615. 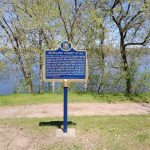 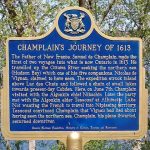 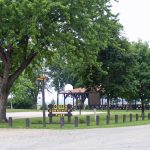