In 2008, the Poirier family left Pincourt, a Montreal suburban town, to settle on a farm in East Hawkesbury, on the border of the provinces of Ontario and Quebec.

In 2011, the company Les Fruits du Poirier was created. In 2011 and 2012, the farm produced a variety of vegetables to sell at local markets and restaurants. In 2013, as the young farm expanded and restructured, it took the decision to focus on berry production.

In 2014, the farm began to sell its long-awaited harvest of asparagus, honeyberries and black, red and purple raspberries.

Les fruits du Poirier is a family farm that specializes in growing small berries and prepared directly on site our local products and uses sustainable and organic culture practices. In season, you can come and pick your favorite berries such as haskap, raspberries, gooseberry, currants, table grapes and nordic kiwi.

Come enjoy the experience of preparing your own jams with our chef in our certified kitchen (with reservation).

Please consult our website for the availability of fruits, sessions to cook your jams or guided tour of the farm with tasting products.

Saint-Eugène is a rural, Franco-Ontarian locality situated in the Township of East Hawkesbury in the United Counties of Prescott and Russell in Ontario (Canada). It is on the interprovincial border with Québec, near Highway 417 between Ottawa and Montréal.

The village of Saint-Eugène is located in the St. Lawrence Lowlands. The water for the village is supplied by the Rigaud River, a tributary of the Ottawa River.

Hawkesbury is touted as the third most bilingual town in Ontario, with about 70% of its inhabitants being fluent in English and French, the two official languages of Canada. (Sturgeon Falls is first with 73.4% followed by Hearst at 71%.) 89% of the population is made up of French speaking Franco-Ontarians.

CHAMPLAIN AND THE OTTAWA RIVER

The story of European exploration along the Ottawa River can be said to have begun with the vision and efforts of Samuel de Champlain. Geographer, explorer, as well as colonizer and founder of Quebec City, where he carried out most of his works, Champlain was the first to publish maps of the Ottawa River and names of topographic features in the Ottawa region as well as in Hull, Pontiac, and Renfrew counties. By the time he began exploring the Ottawa River in 1611, he had already sailed the St. Lawrence, explored the mouths of the Saguenay and the Richelieu, and founded colonies in Acadia and Quebec.

Referred to as ‘Ottawa’s Backyard’, The United Counties of Prescott & Russell is an amalgamation of two counties east of the national capital. Agrarian countryside unfolds as you wind down picturesque rural roads that connect some of Ontario’s oldest and most storied towns and villages.

Prescott & Russell is close enough to the city to be super convenient for a short getaway, but the serene landscape, welcoming locals, country shops and bilingual culture make you feel like you’re a world away.

To learn more about all there is to see and do in Prescott & Russell, visit the city’s tourism website. 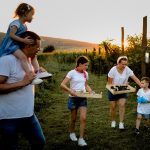