Nepean Point is closed for redevelopment.

Nepean Point is one of the most spectacular lookouts in Canada’s Capital Region, making it a key Capital destination. It is located behind the National Gallery of Canada, in Ottawa. The site, which covers 1.27 hectares, was last developed for Canada’s centennial in 1967.

The NCC is currently redeveloping the site to create a lively, 21st century park, in the heart of the Capital.

In 1876, the site was officially named “Nepean Point” in honour of Evan Nepean, head of the British Colonial Office.

During the 19th century, Nepean Point served military purposes. In 1909, the Ottawa Improvement Commission, the NCC’s predecessor, turned Nepean Point into a park and public space. The statue of Samuel de Champlain was installed at Nepean Point in 1910, and the Anishinabe Scout sculpture followed in 1918.

The Astrolabe Theatre, an outdoor amphitheatre which accommodated an audience of up to 700 people, was built in 1967. It remained a popular destination for events and shows until 1995.

The construction of the National Gallery of Canada from 1983 to 1988 had a notable impact on the Nepean Point’s visibility and access to it. The gallery, in coordination with the NCC, introduced public art into the landscape through outdoor sculptures, giving Nepean Point the character of an informal sculpture garden. These public art pieces include Black Nest, Water Planet, One Hundred Foot Line, Nature Will Reclaim You, Majestic and the Op Art Path. 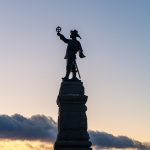 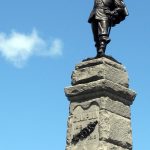 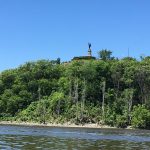